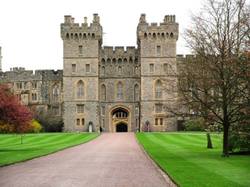 Windsor Castle is an official residence of The Queen. It is the oldest inhabited castle in the world which has been inhabited continuously for about 1000 years.

Windsor Castle was used as a refuge for the royal family during the bombing campaigns of the Second World War and survived a fire in 1992. It is a popular tourist attraction, a venue for hosting state visits, and Elizabeth II's preferred weekend home.

The Ghosts of Windsor Castle:

Windsor Castle is without doubt one of the most spectacular castles in Britain, if not the world. Many famous ghosts have been reported haunting the castle, including Henry VIII, Elizabeth I, and a demonic horned being that brings death to all that see it.
For further information go to: