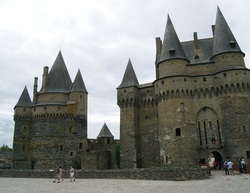 The Château de Vitré is a medieval castle in the town of Vitré, in the Ille-et-Vilaine département of France.
It is a medieval fortresse in a Romanesque style.
The first stone castle was built in the end of 11th century. In 13th century it was rebuilt in a triangular form by baron André III.

The castle shelters today the town hall, the museum, and allows a visit of most interesting.
For further information go to: