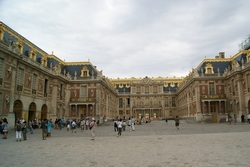 The royal residence and practically speaking the French capital from 1682 to October 1789 (after the beginning of French Revolution). The palace is a symbol of the absolute monarchy system.

When the château was built, Versailles was a country village; today, however, it is a wealthy suburb of Paris, some 20 kilometres southwest of the French capital.
Video: