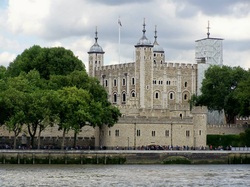 The Tower of London

Her Majesty's Royal Palace and Fortress, known as the Tower of London, is a historic castle located on the north bank of the River Thames in central London. It was built by William the Conqueror in 11th century. It was used as a prison for 850 years!

As a whole, the Tower is a complex of several buildings set within two concentric rings of defensive walls and a moat.
For further information go to: