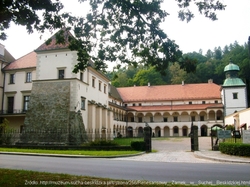 Sucha Beskidzka is a historic town in Western Beskids in southern Poland south east of Kraków. There is a beautiful castle there. Renaissance castle (16th century), named Little Wawel after the royal palace in Kraków. The historical building is surrounded by a park with a neo-gothic orangery. Now it serves as a hotel with a restaurant. There is a museum in the castle that can be visited.
The black lady

The local inhabitants say, at times an apparition of a woman dressed in the black crinoline appears wandering around galleries during dark nights.  It is a ghost of Anna Konstancja Wielopolska who was an unusually strict woman both for local robbers and her subjects. The rumours have it that in one of the castle towers built by her, there was a secret chamber of tortures with a trapdoor, by which the unlucky ones were thrown down. There were gossips that both her husbands died in strange circumstances.  After Anna’s death an apparition turned up in the castle and was being met also when Sucha Beskidzka was passed to other owners.
Sources