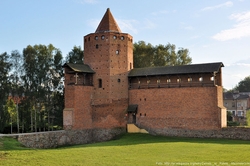 The Rawa Castle was built by King Kazimierz Wielki, in order to protect southern part of Mazovia. It is not known when the construction began: probably it was in 1355.  After the destruction of 1657, the complex was not rebuilt, and by the early 18th century, it was a ruin.

At night in the ruins there is a white lady and crying.
Sources: