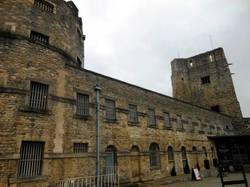 A large, partly ruined Norman medieval castle from 11th century of central Oxford in Oxfordshire, England. It was partly destroyed in the 17th century.

Legend has it that in 1142 Princess Matilda, Henry I’s only legitimate child and known as the Empress Maud, escaped from Oxford Castle by fleeing across the frozen Thames, camouflaged against the snow and ice by her white nightdress. She was running from her cousin Stephen who had seized the throne on Henry’s death in 1135 and had now besieged the Castle.
For further information go to: