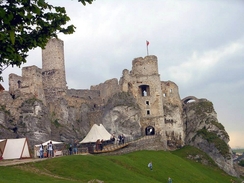 The ruins of the medieval castle built in the 14th-15th century. It is situated on the Castle Mountain (Góra Zamkowa, 515,5 m high) - the highest hill of the Kraków-Częstochowa Upland, on the trail of the Eagles' Nests. The ruins are opened for visitors.

The Ogrodzieniec Castle is a place haunted by mighty dark powers. There have been locally famous reports of the "Black Dog of Ogrodzieniec" being seen prowling the ruins in the night-time. Witnesses have claimed that the spectre is a black dog much larger than an ordinary dog, and is supposed to have burning eyes and pull away a heavy chain. The dog is believed to be the soul of the Castellan of Cracow, Stanisław Warszycki.

For further information go to: http://en.wikipedia.org/wiki/Ogrodzieniec_Castle