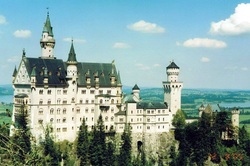 Neuschwanstein Castle is a nineteenth-century Romanesque Revival palace on a rugged hill above the village of Hohenschwangau near Füssen in southwest Bavaria. It was built by King Ludwig II of Bavaria.

It is known as "the castle of the fairy-tale king" and its decorations refers to the king's favourite themes: the Holy Grail Legend and operas by Richard Wagner.
Video: