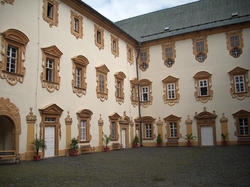 Lemberk Castle is a castle located in the Lusatian Mountains of the Czech Republic, near the town of Jablonné v Podještědí, just west of Liberec. The castle stands on a small hill above the Panenský potok brook.

It was most likely constructed in the close of the 12th century or beginning of the 13th, by Havel of Markvartice. The castle was rebuilt in renaissance style in the 16th century and in the 17th century was noticeably remade in a baroque style which still gives Lemberk its appearance today.
Sources: