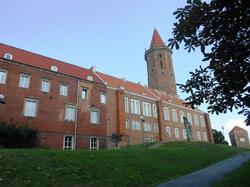 It is one of the oldest polish castles. It was erected at the beginning of 13th century by Prince Henryk Brodaty (Henry the Bearded). Then it was rebuilt in Gothic style. In the 1530s the castle was modernised as a Renaissance residence, and again in 1835 it received a neoclassical look. In the middle of the courtyard there is a glass pavillion where are the foundations of the 13th-century Romanesque Castle Chapel.
For further information go to: