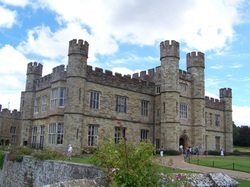 The 12th century castle is known as one of the most beautiful medieval English castles. The castle today dates mostly from the 19th century and is built on islands in a lake formed by the River Len to the east of the village of Leeds. It has been open to the public since 1976.
For further information go to: