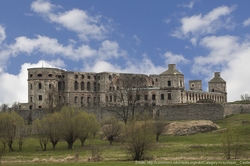 Krzyżtopór is a castle located in the village of Ujazd, in southern Poland. It was originally built by a Polish nobleman and Voivode of Sandomierz, Krzysztof Ossoliński in the 17th century. The castle was partially destroyed during the Swedish invasion.

Krzyżtopór was furnished with amenities that were rarely seen in the 17th century, such as ventilation and heating system, and unique waterworks that provided all rooms with fresh water. Allegedly, the ceiling in one of dining rooms was made up of an aquarium containing exotic fish.
The ghost

According to legend under the ruins there is a hidden treasury of the Ossoliński family, guarded by the ghost of Krzysztof Baldwin Ossoliński.