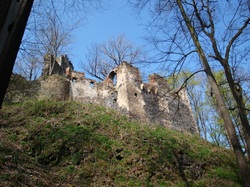 The Gryf Castle  was built on a steep basaltic hill by the Kwisa River. It was one of the largest castle in the Izerskie Highlands. It was the part of the defensive system of the Kwisa District. The structure was erected by Konrad, the Duke of Głogów, in the second half of the 13th century. Since the eighteenth century the castle is in ruins.
White Lady from Gryf Castle


White Lady has been appearing in the Gryf Castle for centuries. It is a phantom  floating in rooms of upper castle, vanishing in the Blue Chamber. From time to time she has been seen wringing her hands, sometimes she roams through corridors sighing. That's the time, when castle or it's owner is in some kind of danger. Mainly she has been protecting children and defenceless people. When maids called her in their dark hours, they could always rely on her.

The White Lady was Adelajda, daughter of one of first castle's owners. She was happily in love with young noble, son of her father's sworn enemy. As the boy asked her to marry him, he was viciously exiled from the castle. After some time, though, father agreed to the marriage. It was a cruel deception. During the wedding he caught the groom and ordered to decapitate him. He also locked his daughter in dungeon and foreshadowed, that she will be roaming through the castle as a phantom until it turns into rubble.
Ruiny zamku Gryf w Proszówce in poland
Sources: