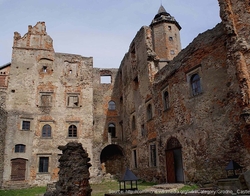 Grodno Castle is situated on the peak of Choina (450 m above sea level) in the north­ern part of the Sowie Mountains. The castle dates back to 1198, to the time of Duke Boleslaus the Tall. Over the cen­turies the castle changed owners several times, and its greatest prosperity occurred in the sixteenth century. As a result of later armed conflicts it was destroyed several times and fell into ruin.

Today the castle was rebuilt and upgraded sev­eral times over the centuries, hence in the old walls one can find remnants of many architectural styles.
White Lady in the Grodno

Since time immemorial, in the castle Grodno White Lady appears . Nobody knows exactly what the mysterious apparition is . Some say that this is the spirit of the necrosed for centuries women from Zagórz that bad margrave broke into the prison dungeon. Others say that the ghost of the old lady of the castle , which with grief after losing her husband rushed to the moonlight into the well , and still others maintain that it is eternally repentant spirit princess Margaret.

In one of the dungeons of the castle you can see the skeleton to be the remains of a beautiful chatelaine Margaret . Her father, Castellan wished well to spend a comely daughter, but she loved it to death the poor squire . One day my father brought to the castle but rich old nobleman. He liked the young Maggie and her father , despite requests nobleman 's daughter gave permission to marry her. The day after the wedding young couple went to the castle walls to admire the views. Then castellan pushed the old man into the abyss , and she returned to the castle in mock despair and informed his father about the " unfortunate accident ." This , however, everything seen and daughter sentenced to death by starvation , by walling in the dungeon .