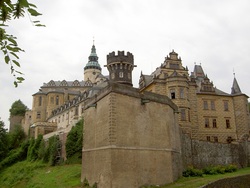 The Gothic castle, rebuild in a Renaissance style.
It was one of the first European monuments opened to public in 1801.