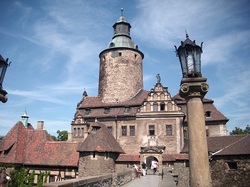 The defensive castle, built in the middle of 13th century, is located on the Lake Leśnia, near the Kwisa river (southwestern Poland). It was featured in several movies.

Nowadays there is a hotel and a conference center there. Each year, in the second half of August, there is a knight's tournament organised in the castle.
Haunted castle

According to the legend, any wife that was unfaithful to her husband was thrown to her death into the well called "the well of the disloyal woman" which is outside the castle. Some people say that the castle is haunted. Sometimes at night you can see the white lady in the bailey. It is the ghost of the wife who was falsely accused.
Videos: