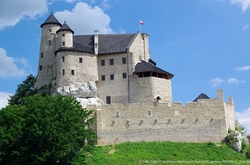 The Bobolice Castle – a royal castle built by King Casimir III the Great in the middle of the 14th century, probably in place of an earlier wooden structure. The castle was a part of the defence system of royal strongholds protecting the western border of Poland on the side of Silesia.

The castle is situated on a steep rocky hill (360 m above sea level). Up till now, only the upper part of the stronghold has survived. The castle was accessible through a drawbridge over the dry moat, and the entire construction was surrounded by walls with battlements, made of local white limestone.
Ghosts of Castle Bobolice

According to 15th century chronicles, a representative of the Krezowie family captured and imprisoned his niece in the Bobolice Castle. She is still said to haunt the stronghold as a lady in white.

There is also a tale about two twin brothers, owners of castles in Mirów and Bobolice. Legend has it that they dug a tunnel between the two strongholds. One day they came into possession of a big treasure – they hid it in the tunnel and put an witch on guard. The brothers understood each other perfectly and could go through fire and water for each other. However, their friendship was put to a difficult test, when one brother brought a beautiful girl from his war expedition. Suspecting that his twin brother may have fallen in love with the girl, he locked her in the cellar near the treasure. One day, during the absence of the witch, he caught the pair of lovers in the vault. He got angry, murdered his brother and bricked up the girl in the castle dungeons. The ghost of the girl is still said to haunt the castle tower.
Sources: