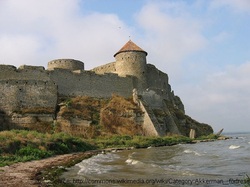 Belgorod-Dnestrovskyi Castle is the biggest ancient castle in Ukraine which is extant nowadays. It is situated on the right bank of the river Dnestr in 2 kilometres from the Black Sea and in 46 kilometres from the city of Odesa. The castle is built on the place of the ancient Greek town of Tira which existed in V century BC.

The castle isn’t inferior to the most famous constructions of ancient Europe, its builders were well-acquainted with building techniques of the West, East and Byzantine Empire. The construction belongs to the tower-walled type and consists of 4 parts: the citadel or the castle of Genoa, the northern, southern and port yards. On the plan it looks like a quadrangle with 4 corner towers. The oldest part is the castle of Genoa built in the second part of XIII century by the people of Genoa.
Lots of legends are connected with this castle.

One legend is linked to “the Maiden Tower”. One Moldavian ruler Alexander the Kind had a daughter, Tamara. She was evil and violent and surrounded herself with dissipated servants. While her father was away on war journeys, Tamara with the help of her servants was robbing the inhabitants of the Princedom. Once, she asked her father for some money to build a monastery, but instead of the monastery she brought a lot of peaceful people and made them build a strong castle. Then she declared herself the Queen of the land, settled in the castle and started robbing and killing people even more furiously than before. When Alexander the Kind returned home from his journey, he was shocked to know what his daughter had done during his absence. He repudiated Tamara and cursed her. After that, she fell asleep deeply. Being asleep Tamara was brought into the tower which the people called “the Maiden Tower” after her. Since then, the cruel princess has been sleeping in her tower, waiting for a prince who will come, expiate her guilt with his heroic deeds and want to marry her. At that moment Tamara will awake.

The other tower is called “the Dungeon Tower”. This tower is connected with a Ukrainian beauty named Paraskovia. According to the legend, the cruel Turkish ruler Uzun-pasha took Paraskovia prisoner and tried to make her change her faith into the Muslim one. But the proud girl remained adamant, and then Uzun-pasha put her into the wet and dark dungeon where she spent long-long days and nights. Once, the Turkish ruler came to see Paraskovia, but her fetters fell down from her, and she walked quietly out of the tower and then – out of the castle. At that moment Uzun-pasha regained his senses and sent his servants to catch the girl. They reached her near the firth and raised their yataghans to deal shortly with her, nevertheless, a miracle happened again: Paraskovia  melted in the air, and on the place where she was standing there appeared a spring. And the janissaries turned into stones around the spring. The spring with transparent and clean water still runs there.
Sources: