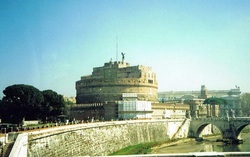 It was in fact a mausoleum of the Roman Emperor Hadrian and his family built between 130 AD and 139 AD. The building was later used by the popes as a fortress and castle, and is now a museum. The Castel was once the tallest building in Rom
For further information go to: